Fichet (or Fichet-Bauche) is a French lock manufacturer that produces high security lock cylinders, safes, armored doors, alarms, and related security products. The majority of locks produced by Fichet are rather unique, and are usually variations on traditional wafer, lever, combination, or slider designs.

Fichet was founded by Alexandre Fichet in 1825. In 1840, Fichet made his first fire-resistant safe, the popularity of which allowed him to open two new factories in Lyon and Marseille.[1] In 1879, Fichet built its first bank strongroom. 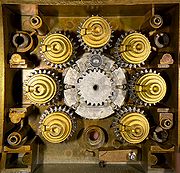 View of the interior of a Fichet Moneo