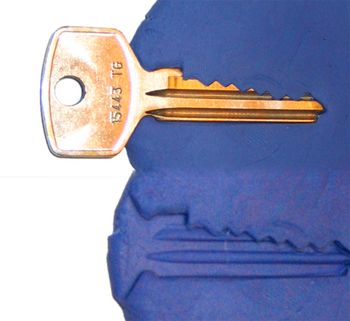 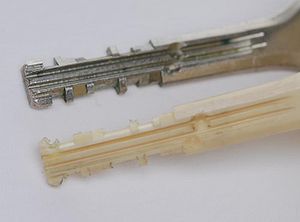 With lever or warded locks, the blank may be coated with something to make identifying marks easier. Traditionally wax or carbon was used to coat the bitting surface. This is still popular in modern use, but other materials, such as paint, are acceptable. The practice of using carbon is known as smoking the key blank. The key blank may also be modified to allow for enhanced movement within the lock, such as thinning of the blade or removal of material from the shoulder or tip. 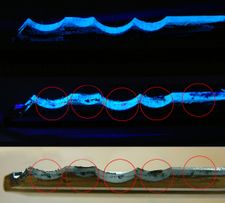 After obtaining marks the key is inspected. Visual aids may be used, such as a magnifying glass, colored/UV lights, or a microscope. The marks left will be different based on the technique, lock type, and component slimming reviews specifics. Pin tumbler locks usually leave small circular marks in the center of the bitting, whereas wafer locks leave rectangular marks at the edges of the bitting.

Once a mark is identified it can be cut. If the key specifics are known the key may be cut to the next possible depth. More commonly, a hand file is used to remove material in small hgh advanced supplement amounts. Care is taken to properly space and angle cuts. Once the cut is made the key surface may be dulled again to improve future markings.

When a component reaches the correct height it will not bind meratol against the plug, and no longer leave marks on the blank. Once all components are positioned correctly the lock will open.

At this point, the key can be cleaned up by carefully nuratrim sloping edges and taking off any sharp points. Sometimes a micrometer will be taken to the key and cuts will be rounded to the nearest known factory cut to produce a key by code.

Custom keys are available that replace the bitting surface with soft materials, such as lead. This makes the marks made by impressioning extremely easy to identify, but care must be taken not to distort the bitting when inserting or removing the proactol plus blank from the lock. Filing is still required using this type of material.

Against dimple locks, various types of tape along with a bump key are used. The key is cut to the lowest depth positions (potentially lower, depending on tape thickness) and tape placed across the teeth whitener reviews bitting surface. When placed in the lock, torque is applied and the key is gently rocked against the pins. The tape conforms to the position of components as binding acne skin products pushes the tape deeper. Eventually, all components are in the correct position and the lock opens.

Foil and metal tape may also be used for other types of locks, namely pin-tumblers. Kits are available that include custom tools that have gaps with proper spacing and depth requirements for the lock. The semenax foil is wrapped around the tool and the tool is gently rocked against components. Like the dimple method, the foil conforms to the proper alignment as binding components align themselves.