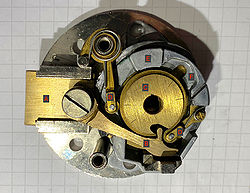 The dial ring can be seen on the bottom of the picture, and it has a separate lead shield and a mechanism for adding friction to dialing. The part on the right is the closest to the container and has a lead shield in it.